An integral education in the joy and dignity of being.

The Sri Aurobindo Yoga Mandir is a integral yogic organisation that aims to give underprivileged children in Nepal, one of the poorest countries on earth, a dignified and responsible, joyful and prosperous future.

The extraordinary destiny of a child from the Himalayas

Ramchandra Das is a remarkable man with an incredible and extraordinary destiny. Born in a stable at the foot of a small, remote Himalayan village, he left his parents, six siblings and friends at the age of 12, without telling anyone so that his plans would not be halted, and set off on foot for India. His goal: to find work and earn money to help his family. But nothing happens as he imagined. From families to wanderings in the streets, he lands in the Indian army at the age of 12 and a half. Against everyone’s advice, he left at 15 to become a Sadhu, a mendicant monk. He learned Hindi, English and the world by reading newspapers and books, and Sanskrit from masters in the ashrams where he stayed; he then became a teacher at the age of 17 or 18 in these same ashrams. At the age of almost 21, he discovered Sri Aurobindo, the Pondicherry ashram and The Mother (founder of Auroville). He stayed there for more than 10 years before life forced him to return to Nepal.

He forgot his mother tongue. He discovered the misery of the children in the streets and decided to act. With the few savings he had accumulated in an account during his years as a teacher in India, he bought a small old mud house on the heights of Kathmandu, with no water, no electricity, no toilets and no access road. He started taking in children, first of all those of his brothers and sisters, to teach them. Everyone lived together in the four small rooms of the house, which served as a bedroom, kitchen, dining room and classroom. After a year, his sister joined him to look after the children. They lived in this house for up to 40 years.

Education and instruction :
a coherent, comprehensive and integral whole

Everyone is involved in everything. He teaches the children to grow vegetables organically and gradually to cook… to look after the few cows they have bought as they save money… to teach what they have learned to the younger ones, both in school and in everyday life. He teaches them to make natural incense.

An integral philosophy animates and guides the whole life of the organisation. It is always present, integrated into the work and daily life in all simplicity. Every moment, every action and everyone participates in this overall philosophy, as best they can. From Ramchandra to the youngest, the example is the first teaching.

The ashram grew: a mill, a building, because the house became too small, huts… and finally, a real school after 10 years of existence. Another ashram is built in the south of Nepal where land is cheaper. This will be the ashram’s granary.

And the organisation continues to grow, driven and guided by a boundless faith that performs miracles: more and more children, new buildings to house everyone, more and more cowsheds for the cows, and guesthouses to welcome foreign visitors. His work is becoming known around the world. Ramchandra travels abroad to share her wealth, to teach yoga and Nepalese cooking, but above all to sell products from the ashram and raise funds to continue her work.

For its 20th anniversary, a third ashram is being built in Ramchandra’s home village, a real ashram for adults, dedicated to the spiritual life.

The organisation will celebrate its 30th anniversary on 24 April 2023.

A great family of joy

Today, the Sri Aurobindo Yoga Mandir is a large family of about 250 people, the vast majority of whom are children between 0 and 15 years of age, thirty or so young high school and university students, another thirty or so young people from among the first children who have become young adults and who continue the adventure to help this unique family in the world, and finally, a dozen adults between 30 and 80 years of age. The visitor who arrives there for the first time is surprised by this living, light, harmonious and above all joyful human anthill.

Since 1993, more than a thousand children have been able to complete their studies and learn to look after a house, a farm, to sing, to dance, to meditate, to practice yoga and other disciplines, and also to speak English. They have become complete, dignified and responsible beings, deeply rooted in daily and practical life as well as in a living spirituality applied to life, like Ramchandra, the child of the Himalayas who became a yogi and father of one of the most beautiful families in the world. 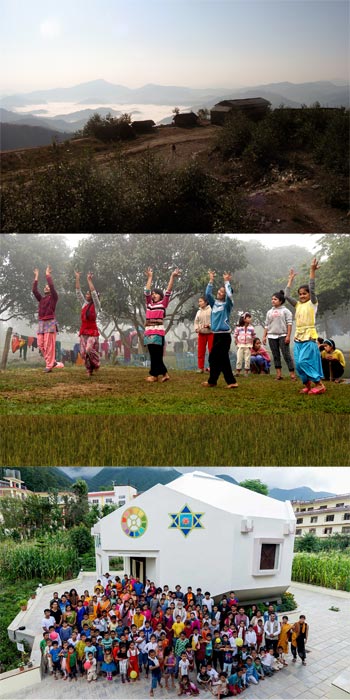 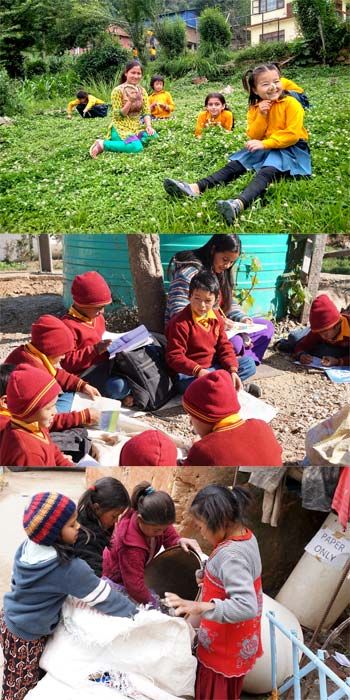